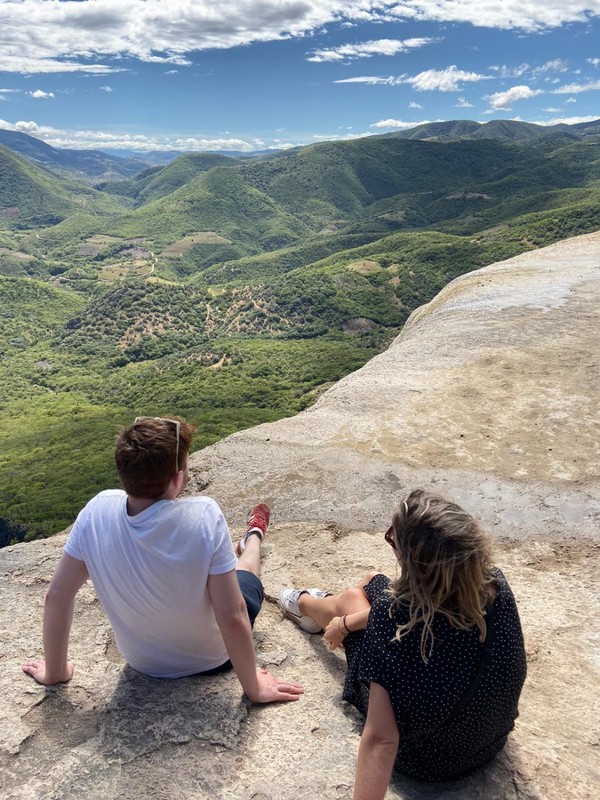 One night bus later and Oaxaca here we are. The bus was fine - just a bit short. We got off to sleep around 2 am I think and both dropped in and out until our 7am arrival. So the first day in Oaxaca was spent on around 4 hours sleep. We would crash later...

Here we stayed at Casa Angel hostel, probably our favourite hostel so far. Super friendly staff, loads of great daily activities, tasty breakfast of eggs and beans and comfy dorm beds. It was a good choice and we hung out with a lot of other travelers here.

On our first morning, we drowsily stumbled to the nearby market and (as per usual over here) enjoyed an extremely tasty and hearty cooked breakfast. I think this was Rachel's first time having Chilaquiles, which would become a bit of an obsession for her in time... We then (as is also becoming habit) just wandered around the town and markets for the morning. Oaxaca is another beautiful colonial town, but felt a bit different to San Miguel De Allende and Guanajuato. Maybe wider streets, maybe more chilled? Not sure... But we loved it. 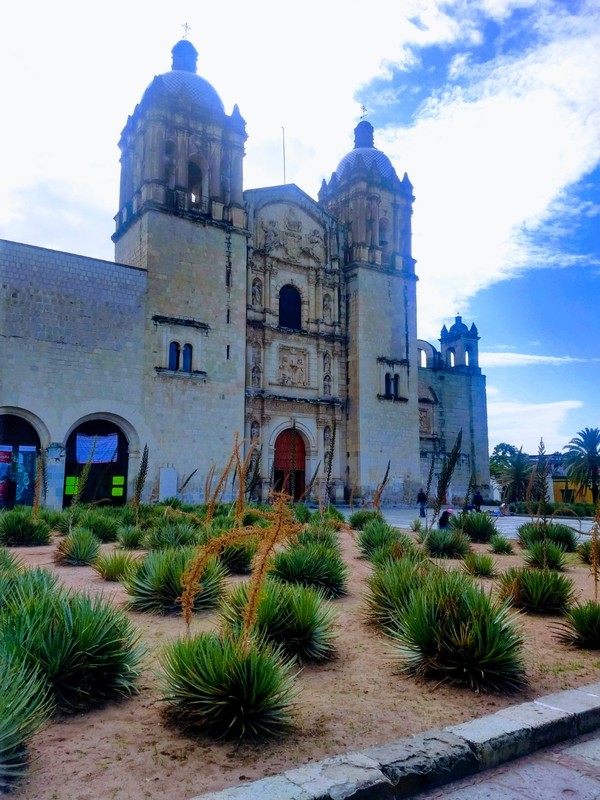 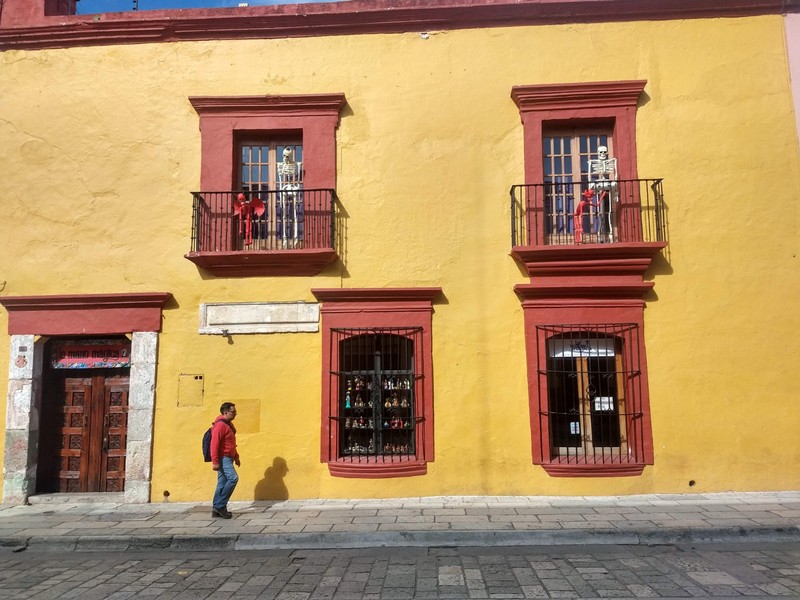 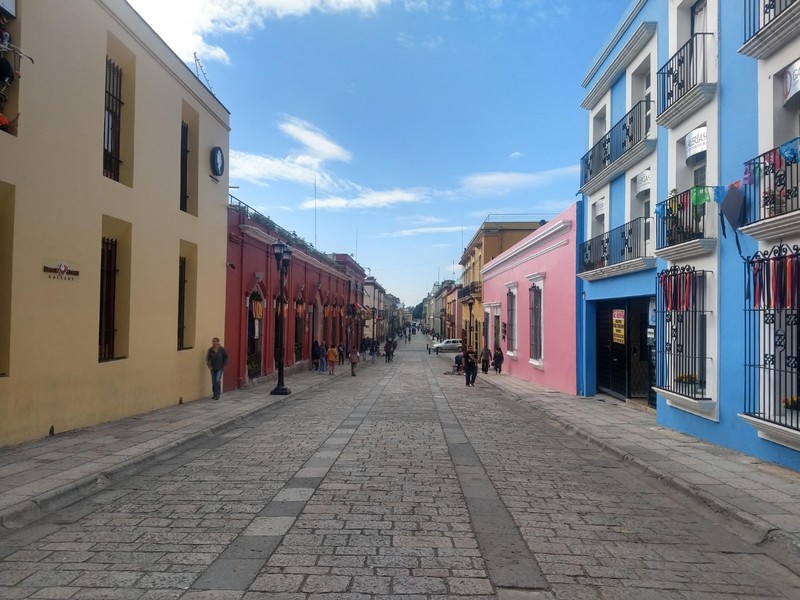 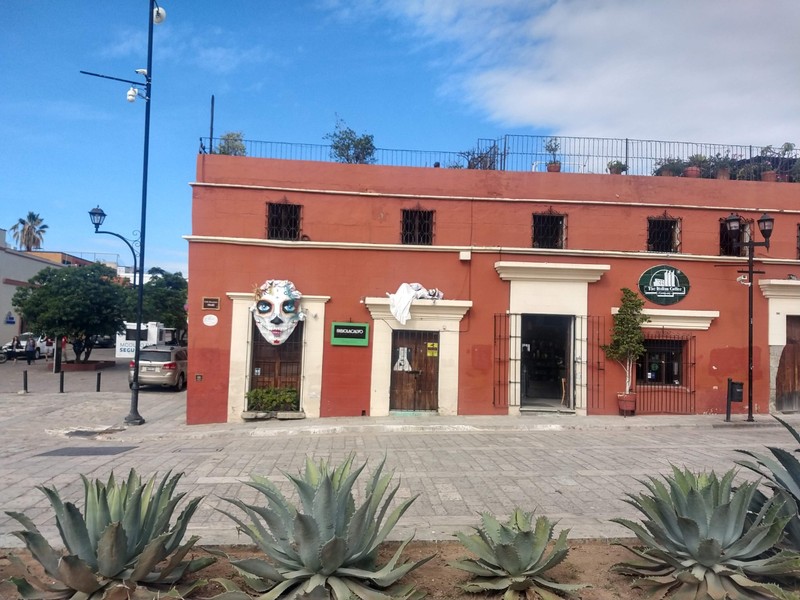 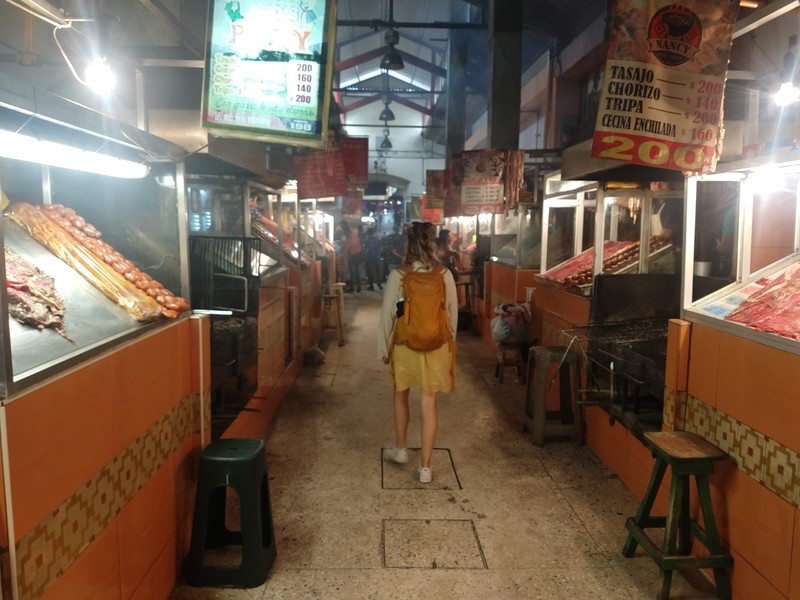 Around 1pm we really started flagging and so went up to the terrace on our hostel and laid in the sun and snoozed. Refreshed (boosted by a homemade Oaxacan chocolate brownie), we headed out again and found ourself on another terrace - the rooftop of a Mezcal bar. However, for now no Mexcal was consumed and I enjoyed a beer and Rachel did not enjoy a wine - she maybe learnt her lesson about ordering wine out here. 30 minutes later and we'd both also enjoyed another beer, so all was good again.

We headed back to the hostel and had a fair few drinks on the roof. The atmosphere was great, with a salsa class going on at the other end (that Rachel got dragged into for the last 20 minutes!). After having found the hostels in Guanajuato and SMDA to be lacking this social aspect, this was really what we were looking for.

The next morning we went along with the hostel's free walking tour, run by a local Oaxacan (Ever) and a French woman (Theodora) both working at the hostel. This was excellent - chilled, nice information, lots of samples of food and drink (e.g. tejate; a drink I don't think we would ever have thought of drinking and also a cheesecake/blancmange type desert) and the guys were happy to take detours for ice cream (Rachel very happy) and a walk up the hill to the ampitheater overlooking the whole town). 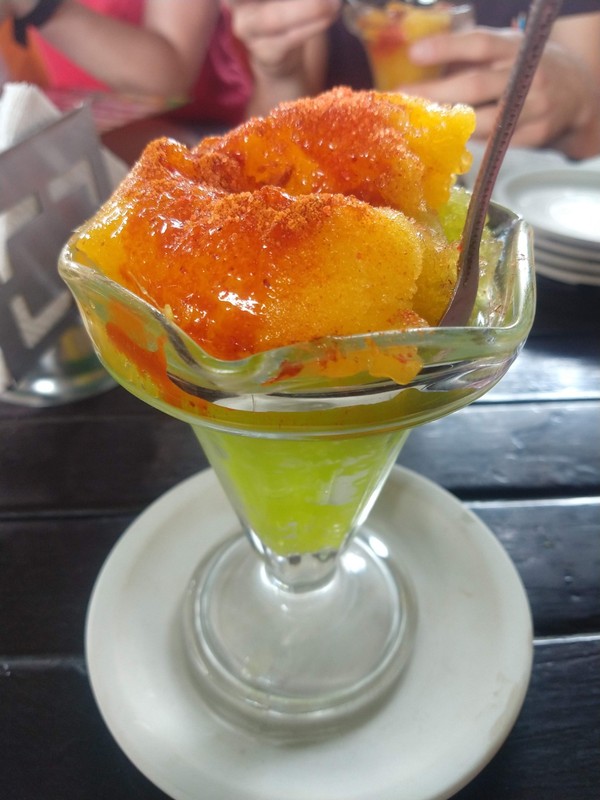 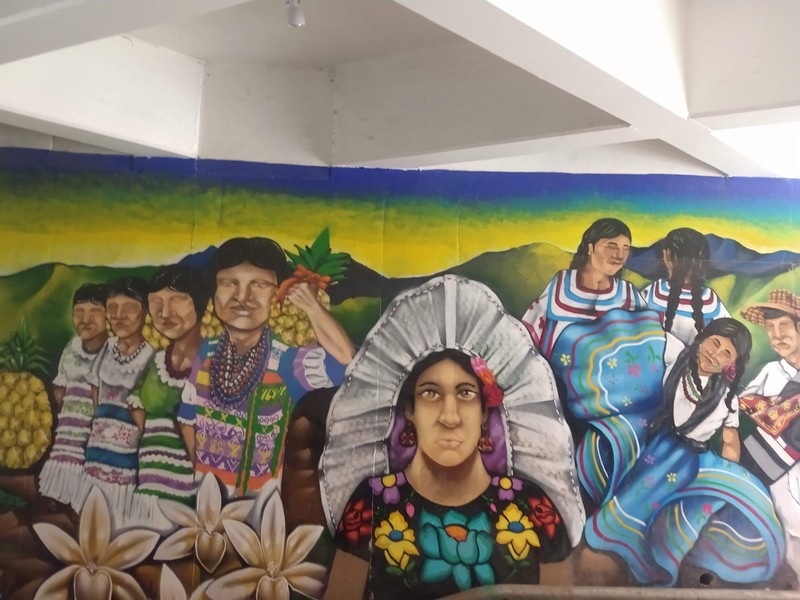 Street art on the way up to the amphitheater viewpoint

That evening was drinks on the terrace again. A Belgian couple (Yves and Marijke) had mentioned that they were planning on making their way to Hierve El Agua the next day on this night I drunkenly told about 15 people who all expressed interest. Yves looked quite shocked when I told him the news... But we had a plan for a group of us to all start at 8am to beat the crowds and journey there together.

One hour later and about 6 of us (including the Belgian couple) all agreed to go on the hostel's Mezcal experience. The 8am start was already at risk. This was again lead by Ever, who told us an awful lot about Mezcal and let us drink an awful lot of Mezcal. It was a really fun night, spent mainly in a lovely little Mezcal bar just the other side of town. By the end Rachel was struggling and making me finish off her last few sips! Mezcal is an interesting drink, I'd had it before but there's just so many different types out here. I think I still need to develop my tastes and understand which type I prefer most.

So... next morning, 8am start yeah? Well that didn't really happen. Rachel wasn't seen until around 9am and neither was Yves himself - our defacto tour guide for the day! But there was a group of us and we left around 9.15am for the taxi area and hit the road. An hour and a half later of our taxi pummeling it through "less than ideal" mountainous roads and we arrived at Hierve el Agua. This really was worth it though - halfway up a mountain, sunny and warm... And these huge naturally formed pools of water caused by the slow petrification of the waterfalls over time. The natural water was cool and pleasant to swim in, with an amazing view just over the edge of the pool (don't lean over too much though, it's a hell of a drop!). We spent about two hours here, both in the pool and also walking around to the various viewpoints. It was a really lovely group of people to spend time with too. Definitely a highlight of the first three weeks! 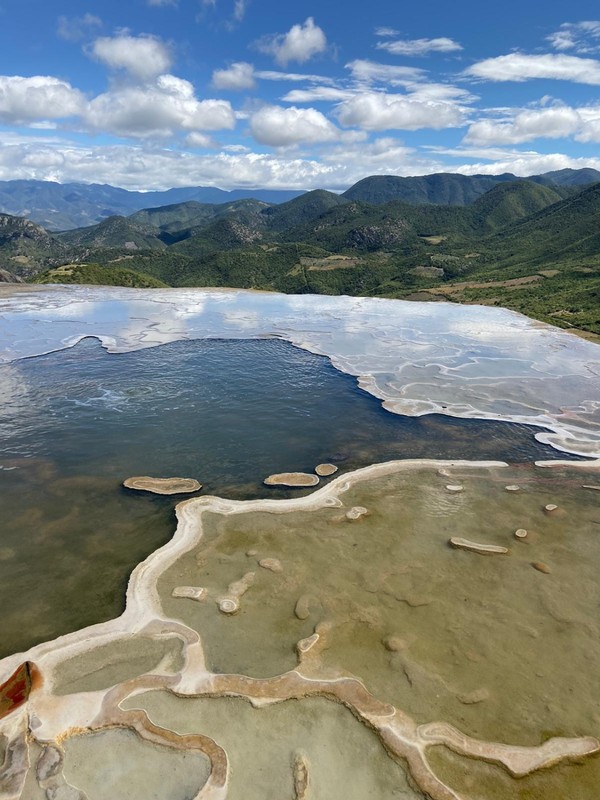 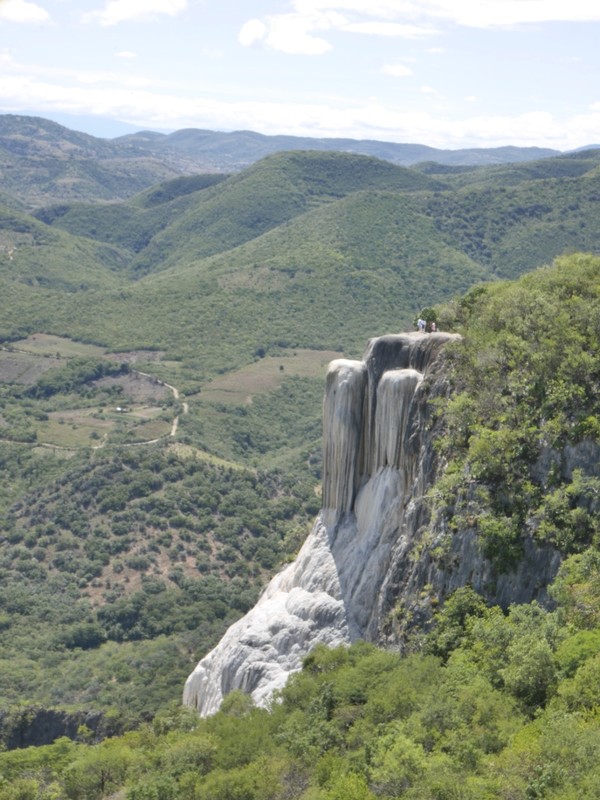 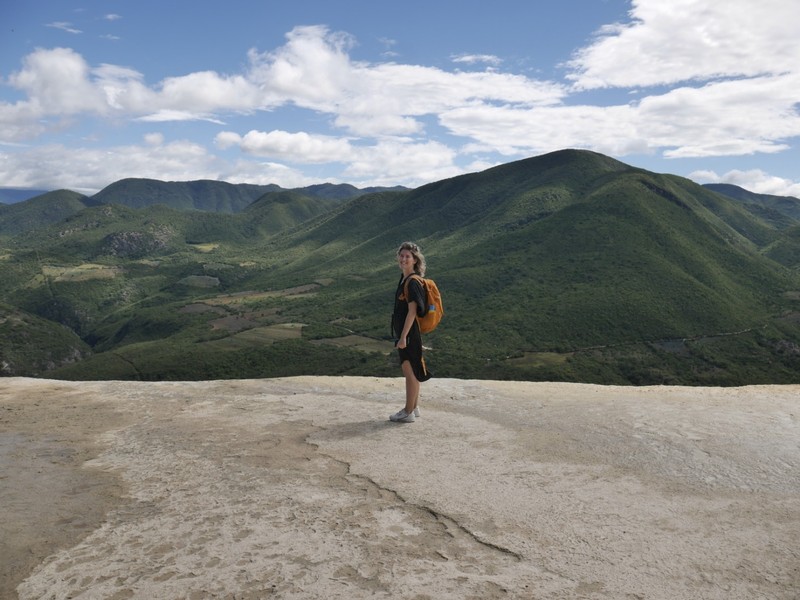 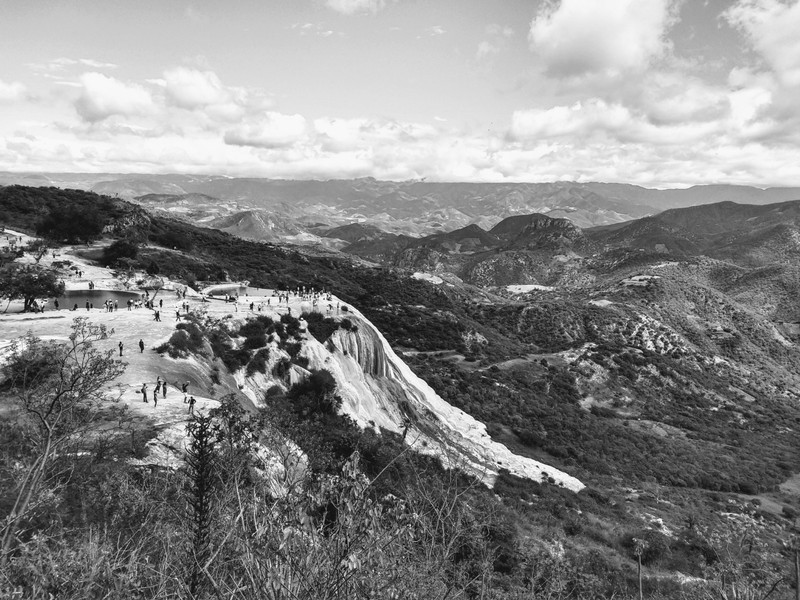 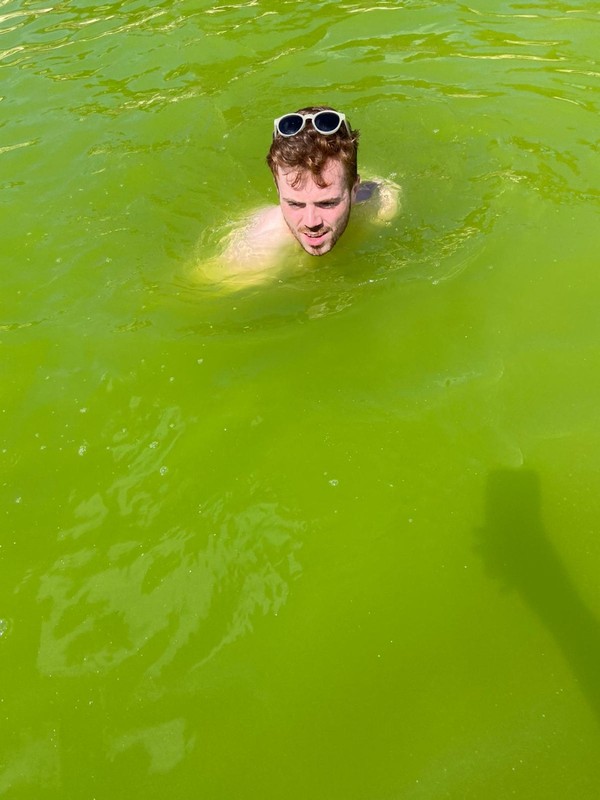 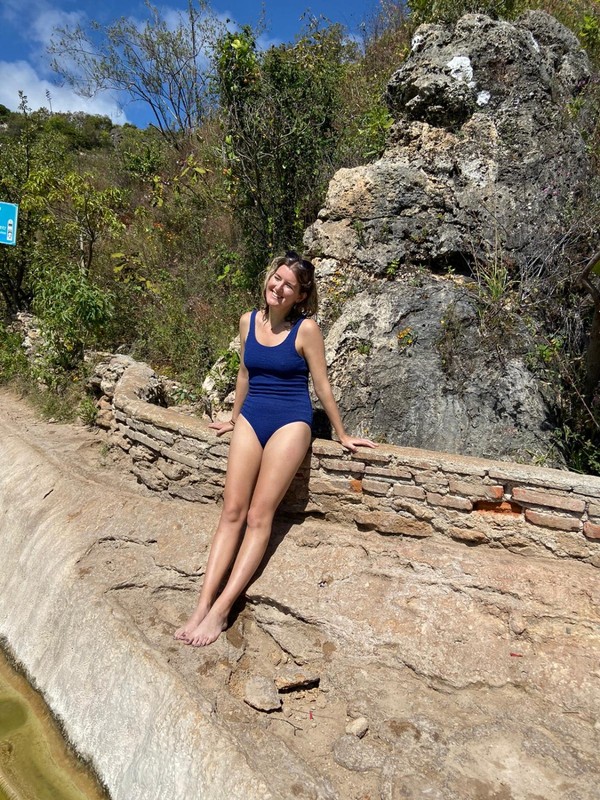 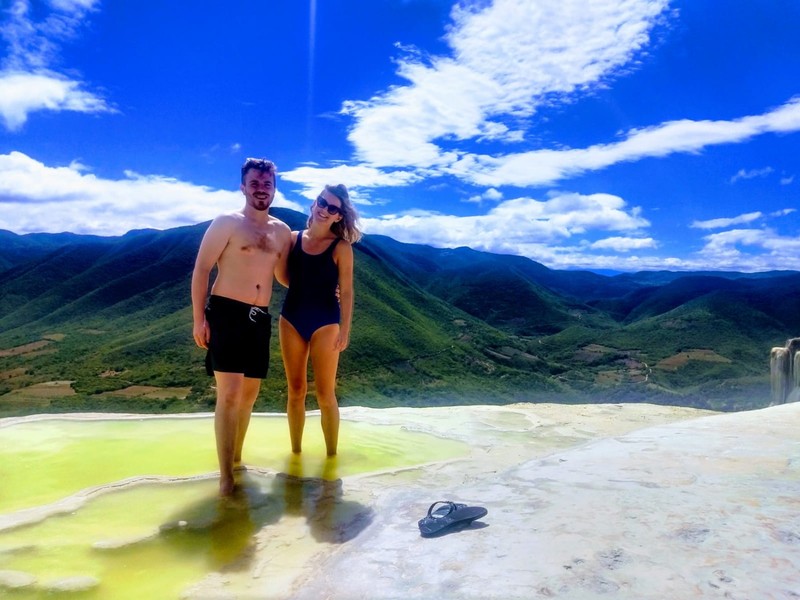 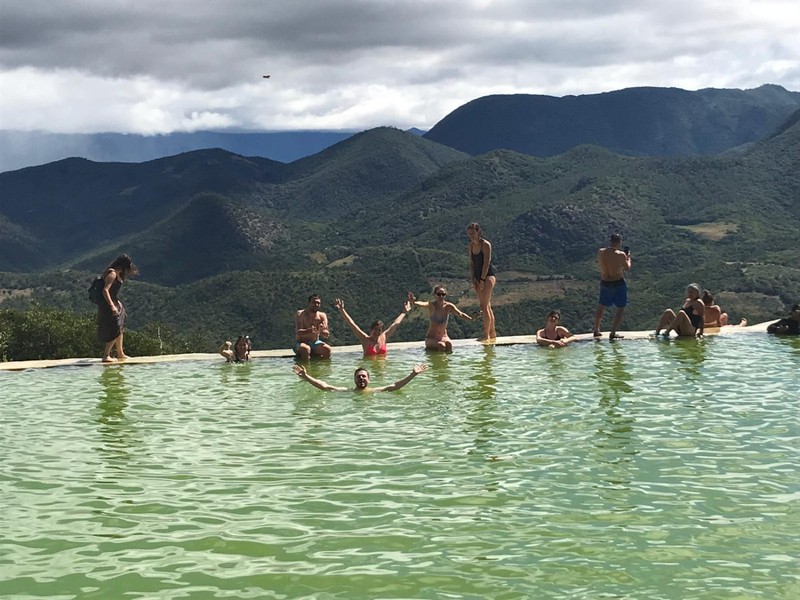 On the way back, we asked the taxi driver to go via a traditional Mezcaleria. He took us to a famous one in his hometown of Mitla, where they still use the traditional techniques. Yves had to act as our translator (he really was earning his tour guide credentials this day), but the owner spent an hour taking us through the entire process (including a horse still working a crushing wheel over Maguey plants!) from start to finish. It ended with tastings of about four different Mezcals (Rachel was struggling by now). 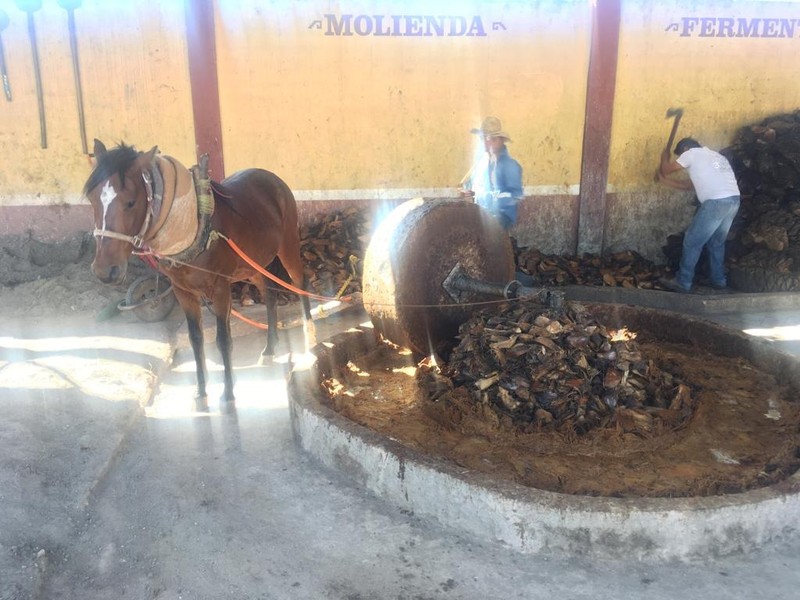 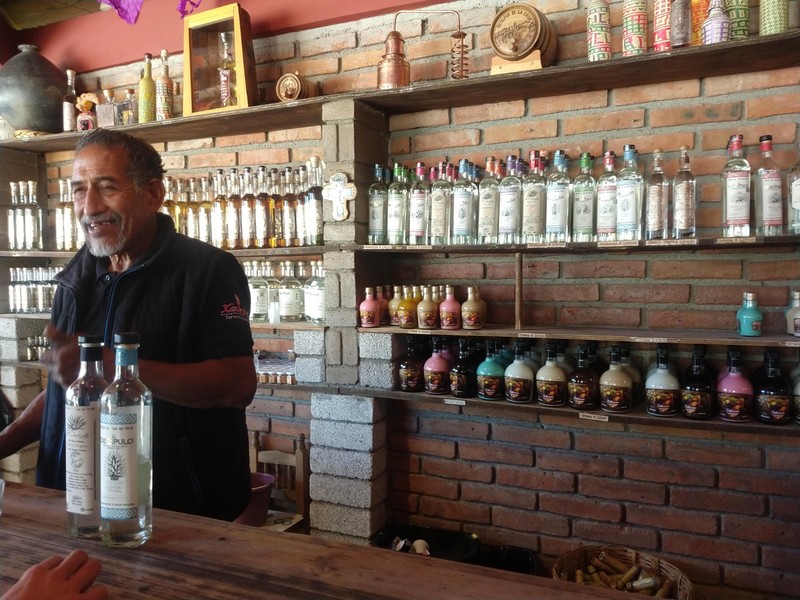 Once back, we had around 4 hours left before our night bus (maybe two in three days was pushing it...). We had seen some lovely Oaxacan textiles down at the Artesenal Market and, well, 20 minutes later we were the proud owners of a traditional Oaxacan rug... Woops! Well, it's light and packs down nicely - let's hope we don't come to resent it over the next five months!

We just had time to squeeze in a meal of mole each and one last drink on the hostel roof, then we said our goodbyes and headed off to catch a night bus to Puerto Escondido - we were ready for some beach time!

Posted by joe90mitch 11:57 Archived in Mexico